We enjoyed two full days at sea before we arrived in New Caledonia. There was so much to do on board... planned activities to take part in, four restaurants, casino, swimming pools, gym (yikes - no thanks), karaoke bar, night club, bars, hairdresser, beauty spa, duty free shops. 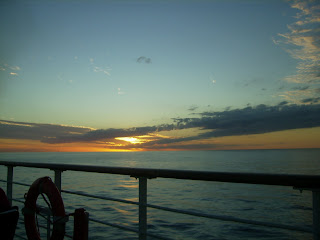 Hubby and I enjoying the wine tasting on board. Hiccup!!!! 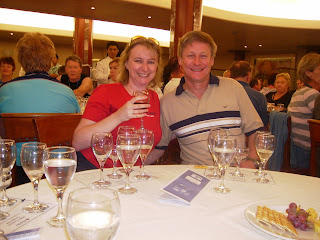 My second night on board, the sea was a little rough. I was considering taking a sea sickness tablet but hubby said, "Come with me, I know what will sort you out." We spend the next six hours, dancing, singing and drinking wine. After a while I couldn't decide if I was swaying because of the ship or because I was drunk. So funny. 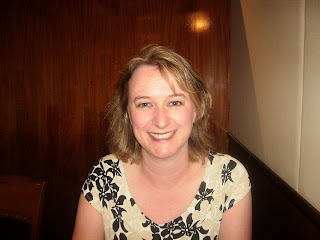 I'm out of town for a few days guys. I'll upload more pics when I return home.
Love KB
xxxx

Hey everyone. I've added a new feature to my blog today. If you fancy having a chat...go to the bottom of this page and log into KB's room. Talk soon.

These two lads had the dubious honour of being our waitors for ten days...poor boys. I was greeted every evening by the words, "Good evening Miss Karen, bottle of Shiraz?". OMG, I am so predictable. 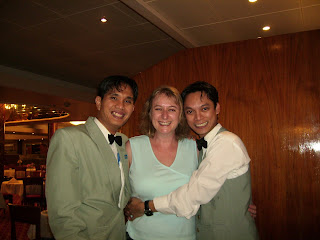 Arrrgg, I'm having problems downloading pics this evening. I think I will give up and try again tomorrow.

Email ThisBlogThis!Share to TwitterShare to FacebookShare to Pinterest
Labels: cruise, vince and ary

Holiday Time - All Aboard 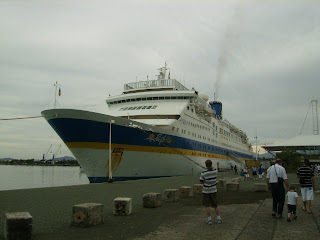 Hubby and I boarded the Pacific Star after
breakfast. She wasn't due to set sail until sunset so we spent the day exploring

I was pleasantly surprised by the size of our cabin. 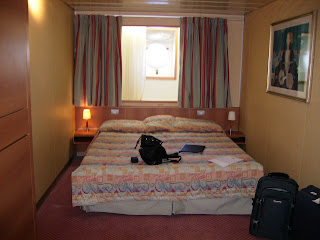 I made the mistake of saying to hubby, " Everything's running very smoothly, considering all the things that could have gone wrong." Hmmm, I should learn to keep my mouth shut.

I was informed my luggage had been 'delayed', which is another way of saying lost. I was relieved when my suitcase arrived four hours later. It had been sitting outside another passengers room the whole time. 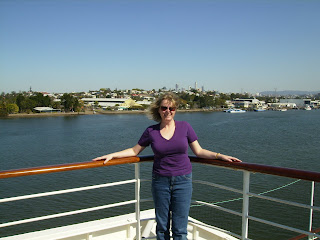 Tis I in the wind before leaving Brisbane.

Hubby and I have always wanted to go on a cruise. So, when a special deal was offered on the Pacific Star for a ten day cruise - we took it.

Ten days before our trip, the islands we were to visit experienced terrible storms. Pacific Star was badly damaged and the passengers had to be offloaded at Vanuata and flown home.

The ship travelled to Brisbane for repairs. We were informed the cruise would probably be cancelled.

Our travel agent phoned us a few days before our leaving date to ask us if we would mind leaving a day early and being flown to Brisbane to board the ship. Cool!!!!!!!

The P&O company booked a 747 for the passengers who were to travel from Auckland to Sydney. We had a ball on the flight. We stayed in a five star hotel in Brisbane. We were informed we could order anything from the restaurant and clear out the mini bar if we wished and P&O would foot the bill. Can you imagine someone telling me there was a free bar? I thought I'd died and gone to heaven.

Wow, the whole experience was fantastic. The best inconvenience I've ever been through...hehe! 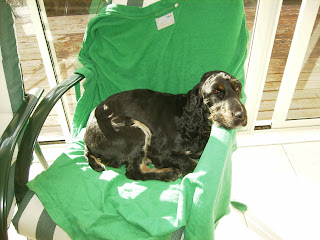 Coco was not amused when I informed her she would be spending the next couple of weeks in the dog kennels.

I don't like to leave her at the kennels but, I felt it was in her best interest after the house sitter debacle.

A friend of ours offered to stay at our house and look after the place while we were away. Hubby and I cleaned the house from top to bottom, filled the pantry and left a bottle of vodka - as a thank you.

I left for my holiday feeling confident my home and my babies were in good hands. I couldn't have been more wrong!!!!

- a house smelling of cigarettes (hubby is a smoker but, our friend knows smoking is not allowed in the house)

- rusty frying pans (from being put in the dishwasher)

The worst by far, was the state of Coco. She has an enclosed area, which has a dog kennel and space to do her business. We put her in there for small periods of time when we aren't able to take her out with us. My poor, baby dog had obviously been locked in there the whole time we had been away. The area where she can relieve herself was so full of waste, she had started to use the deck area instead.

The first thing I did when I arrived home was wash her - she smelled like shit. I was disgusted, in fact, I still am!!!!!!!

Some friend he turned out to be. LAZY BASTARD!!!!!!