Happy Anniversary To Us

Hubby and I celebrated six years of being together this week.

I feel so happy and blessed to have found Steve. He is the kindest, funniest, most loving person I know and he’s also my best friend. I love spending time with him and he treats me like a princess.

I’m looking forward to spending many more happy years together.

Earlier in the week, hubby and I were watching an episode of Criminal Minds. One of the characters on the show was trying to defuse a bomb. Suddenly there was a huge noise and our house shook. It felt and sounded like a large truck had crashed into the side of our house. As you can imagine, it was quite a shock. The neighbours who were home came out of their houses and we tried to figure out what had happened.

A little while later, we learned that there had been an explosion at a factory in our neighbourhood and a man had died.

That's all from me today.

Hubby and I recently watched an episode of ‘Secret Life of Dogs’. This week, dogs were being filmed while they were home alone and the results were rather upsetting to me. There was whining, howling, barking and many other forms of separation anxiety.

isn’t left on her own very often, so when we went out last night, we decided to do a little experiment of our own. I set up my camera in the lounge and we headed out for a couple of hours.

I’m happy to report that the video was actually really boring. ate her chew treat, drank some water and spent most of her time in bed. She wasn’t even waiting at the door for us when we returned.

I'm so happy with these results.

Hubby and I have had a busy week. Our appointments with CADS and the Gym went well, so far, so good.

Mum and Dad returned from their holiday in and stopped by our place on their way home. Hubby and I made them a cooked breakfast of bacon, hash browns, toast and eggs. It was lovely to see them and they thoroughly enjoyed their breakfast.

was due for a visit to the torture chamber (dog groomer’s). She doesn’t enjoy being clipped and it took many years to find a groomer she was comfortable with. Last time she was clipped we were very disappointed with the results and we later discovered that the kennels had changed ownership. Luckily we found a new dog grooming place where feels comfortable and the groomer did a wonderful job. 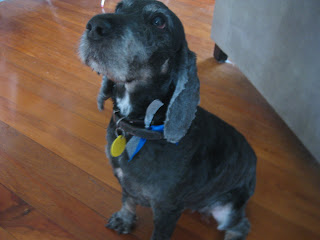