I know this birthday will be bitter sweet for you but please try to enjoy it as much as you can. My thoughts are with you and your family.

I bought a huge bag of sweets to give to the Trick or Treaters. Hopefully, they'll stay away like they did last year and I can eat them all myself. Hehe!! 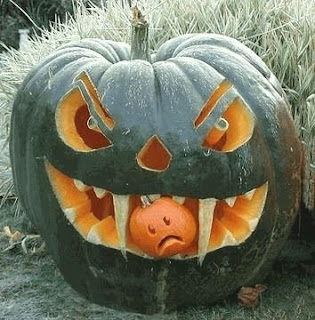 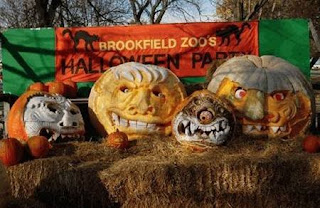 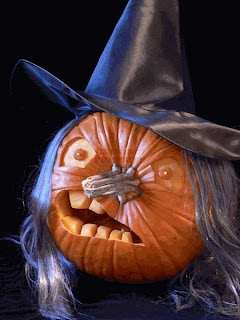 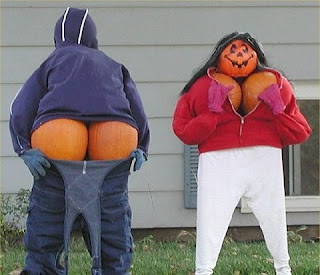 It's not very exciting but I HAD to rub Dickiebo's nose in it after the show off comment. *giggles*

Yikes, I've been trying to get this loaded for about three weeks. Must have to hold your mouth a certain way for it work...hehe. Now that I know it works, I'll annnoy you with more vids on a regular basis. You've probably noticed, I'm more into visuals than writing. *wink*
BTW, sorry about the sound quality but I don't have the heart to remove it since it's taken me so long to get in on here. May be a good idea to turn the sound down a bit.
I'll make it more exciting next time...this was just a little experiment.

Loved my time at Ocean Park. It's one of the most amazing oceanariums (is oceanaruim a real word) in the world and an amusement park. 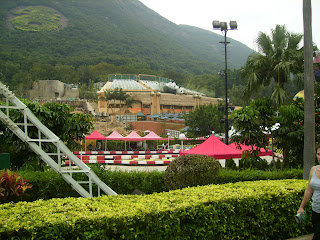 The pandas looked happy enough but I don't like to see them in such small enclosures. *sigh* 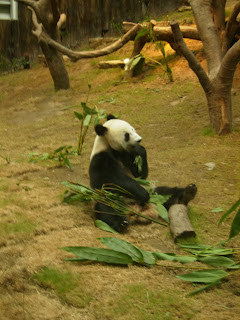 The Dolphin University was cool. Those dolphins sure are smart. 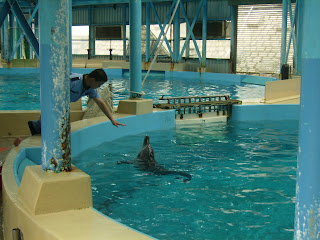 The cable car ride to the main attractions was awesome. Breathtaking views of Repulse Bay. 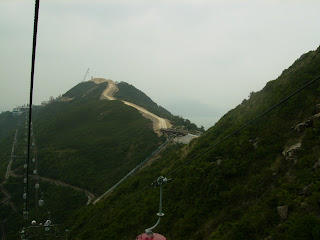 Hubby made the most of the roller coaster rides . I joined him on the log ride, the most amusing part being a sign which advised us of the hazard of putting up umbrellas while on the ride. Surely, no one could be that stupid! Too funny. 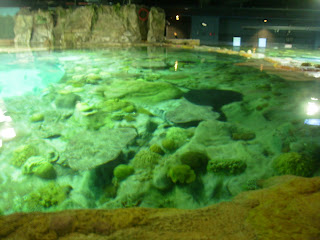 Aquarium was fantastic. AIR CONDITIONING...could have stayed in there all day.

Need A Bit Of Excitement?

My good friend Muttars is trying a wee experiment. He's published the prologue of a book he's written on his blog and would be interested in our feedback. Check it out and tell him KB sent you. You won't be disappointed! 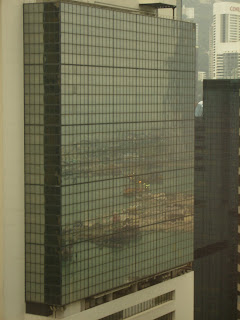 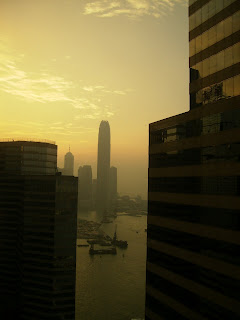 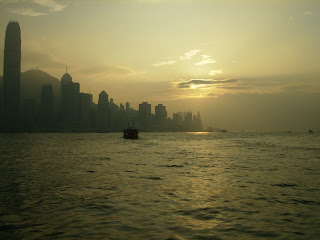 I'm still in procrastination mode. I've some funny stories to share but in the mean time, hope you enjoy the pics.
Love KB
x

I have so much to update but can't get my arse into gear. All I can write at the moment is how happy I am to see the - email follow up on comments feature. I was finding it so hard to keep up with all the blogs I'd been commenting on, I had started recording it in a book. LMAO, good one Karen, you sound like an old lady saying things like that.

Email ThisBlogThis!Share to TwitterShare to FacebookShare to Pinterest
Labels: day to day, procrastination

I was horrified today to see a Christmas tree and other decorations on display at my local supermarket. I feel like I've only just recovered from last Christmas. WTF!!!

Email ThisBlogThis!Share to TwitterShare to FacebookShare to Pinterest
Labels: Christmas, day to day

Fart in a wet suit 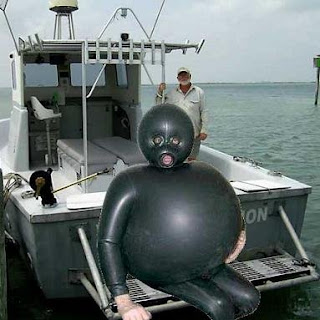 Email ThisBlogThis!Share to TwitterShare to FacebookShare to Pinterest
Labels: funnies

The teasing has already begun *sigh* 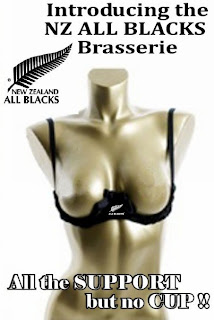 Email ThisBlogThis!Share to TwitterShare to FacebookShare to Pinterest
Labels: All Blacks, funnies 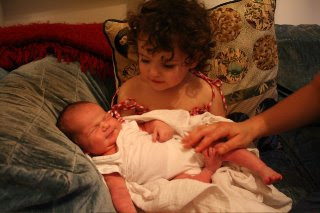 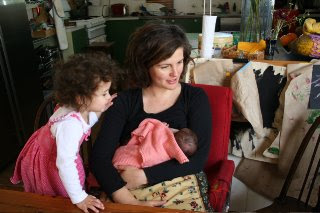 The Good, The Bad and The Rugby

The Rugby World Cup is finally over and I'm happy to see South Africa as the winners. I think they deserved it.

For those of you who didn't know - I was born in England and moved to NZ, with my family, when I was 15. I would never have heard the end of it from my Dad if if England had won, not to mention the teasing from some of you bloggers...you know who you are!

Fingers crossed the All Blacks can deliver in four years time when the tournament will be held in New Zealand. Woohoo! I better start saving for my ticket now.

I do have some happy Rugby news to share, my Auckland boys won the Air NZ Cup last night (national, provincial championship) and a couple of weeks ago they won NZ's most coveted Rugby prize - Ranfurly Shield. Yay, a couple of prizes to display in the trophy cabinet until next season.

So, that's the end of the rugby until next year. I'm having withdrawal symptoms already.

I have so many pics and a few stories to share with you guys but, they will have to wait until tomorrow.

A quickie from London

Hi guys, I'm half way through my trip and loving it so far. Has been non-stop since I left Auckand. Have had time to catch up with Grace, done lots of shopping and sight seeing. My feet are so sore - I may need a new pair when I return...hehe.

The only thing I'm not enjoying, is being here while the Poms are winning all their rugby games (bite your tongues dicki and Keith). Everywhere I turn, it's in the paper and on the telly. This morning the paper was saying Johnnie was a hero. A hero is someone who runs into a burning building to save a child...not a rugby player. Yes, I'm still bitter...lol.

Anyway, miss you guys and looking forward to catching up when I return on the weekend.
Posted by KB at 01:28 10 comments:

I'm heading off on my travels again. I'll be visiting my step-daughter in the UK(so exciting) and swinging by dickiebo's place to slap him for insulting my boys...lol...be afraid my friend, be very afraid!!!!!!

I'll be back in a couple of weeks with heaps of pics.

Try to be good while I'm away but if you can't...make sure you tell me all about it when I return.

The people here who know me well will know I am devastated today. My boys didn't make it through to the semi-finals of the Rugby World Cup. I feel like I'm going to wake up any minute to find I was having a nightmare.

If someone had told me a week ago that England would be in semis but not New Zealand - I would have laughed in their faces. *sigh* NZ have only lost a couple of games in the last few years whereas England have hardly won any but England are in semis and NZ aren't...WTF...what a joke. Scuse my language.

I know I am biased but I really think NZ should have beaten France. The referee has a lot to answer for - he made some shocking decisions; sending Luke to the sin bin, not noticing a forward pass which resulted in a try...arrgg...I could go on but what's the point!!!!!!

I know people will say get over it Karen, it's just a game but I am gutted. When I saw our tough Captain Richie almost reduced to tears this morning...I don't have the words to describe how heartbroken I was for him and for NZ.

I'm off to drown my sorrows with a huge bucket or wine now.

A Beautiful Day In Auckland 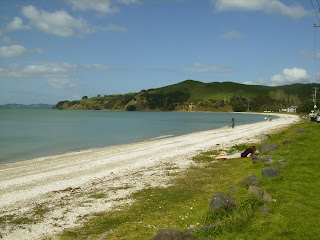 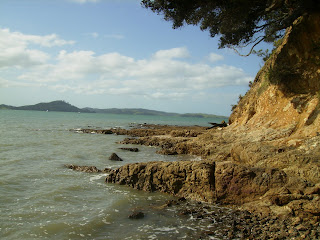 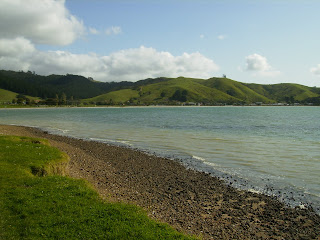 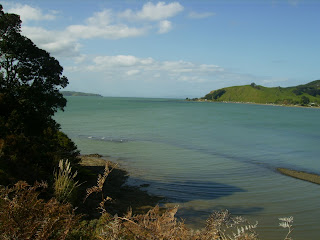 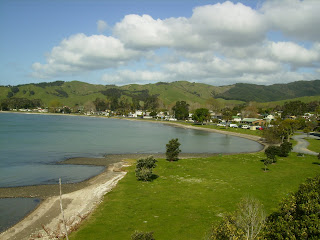 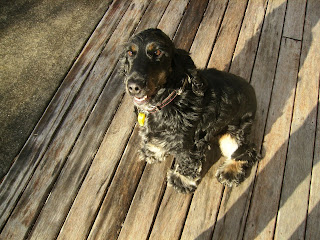 My wee girl turned three yesterday. She enjoyed her pressie but had trouble carrying it around as it was almost as big as her...hehe. 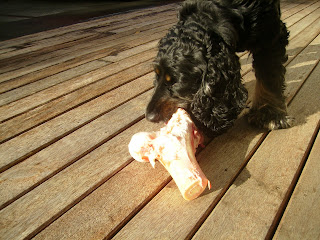 If you would like to sponsor a friend of mine in aid of breast cancer awareness, follow this link:

Cheryl did a wonderful job of raising money for charity last year and is about to do it all again.

Keep up the good work my friend.

*rushes off to make a donation*

Sending hugs and kisses to our friend, Keith Hillman.

I have been feeling a bit down in the dumps as I've been on my own for the last ten days or so. Imagine my delight when I opened this little parcel of goodies from Keith.

Half naked men and chocolate...what more could a girl want!!!! 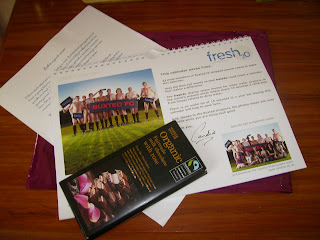 Thank you so much my friend, looking forward to hearing all about your hols on your return.
xxxooo
Here's some info about the calendar
http://keithsramblings.blogspot.com/2007/08/ball-in-good-cause.html