Momentum builds
No turning back
Doubt consumes
Fuels the attack

Whispers abound
Rumours spread
Pulling back
No searching ahead

Truth forgotten
Scandal full blown
Lies take on
A life of their own
Posted by KB at 15:44 18 comments:

Her remaining senses kick into overdrive as her eyes become accustomed to the darkness. The scent of copper assaulting her nose, the dripping sound from many taps? She steadies herself against the wall, flinching from slippery slime beneath her hands. The taste of fear but all too late. The vision before her predicts her fate.


Flash Fiction - Every Friday, I compose a short story of 55 words - no more, no less. If you would like to join in the fun and games... post your story and report to the boss -

G-MAN
If you're not interested in contributing a story, feel free to read the other entries. I'm sure any comments you have would be appreciated.

I have some personal issues I need to attend to. I'll pop in and see you when I can.

Take care. I'll be back.

nowhere to run
nowhere to hide
some secrets should
remain inside


the heart is willing
the time is now
a little faith
takes care of the how
Posted by KB at 21:16 12 comments:

SOMETHING TO THINK ABOUT

I think I stole this from Dickiebo but I'm sure he won't mind cause he loves me.


As we grow up, we learn that even the one person that wasn’t supposed to ever let you down probably will.

You will have your heart broken probably more than once and it’s harder every time. You’ll break hearts too,so remember how it felt when yours was broken. You’ll fight with your best friend. You’ll blame a new love for things an old one did. You’ll cry because time is passing too fast, and you’ll eventually lose someone you love. So take too many pictures, laugh too much, and love like you’ve never been hurt because every sixty seconds you spend upset is a minute of happiness you’ll never get back.

It's almost time for Whitesnake to toddle off back to Australia. I've been lucky enough to catch up with him a few times while he's been in NZ. He's exactly as I imagined and has had me in stitches with his stories and jokes. 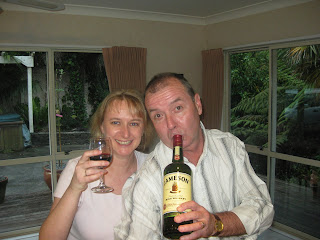 He came over to my place for dinner last week. He was staying in a motel about 15 mins from my place so I drove over there to pick him up. We had a great night. My dog usually barks when visitors arrive, I was surprised when she greeted Steve like he was one of her best buddies.

NOW YOU SEE IT 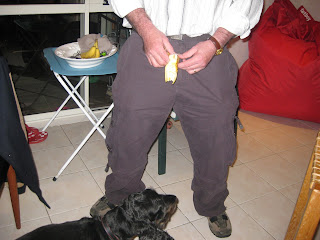 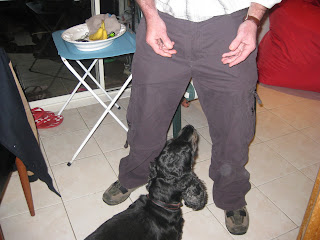 Our friend Laurie cooked a Seafood Gumbo - yum, yum. I wasn't able to drink much as I had to drive Steve back to his motel later so I settled in and watched the boys have a few too many. They were doing fine until hubby brought out the shot glasses. 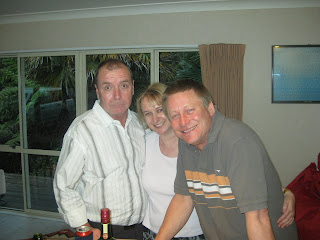 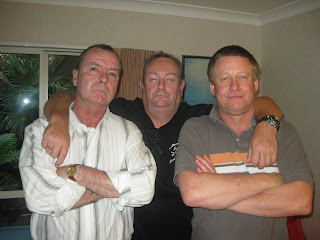 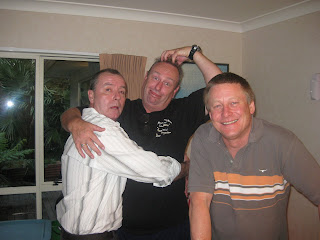 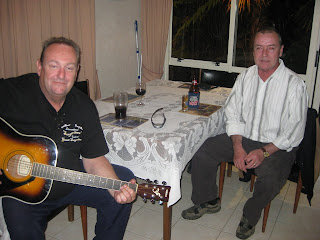 Steve seemed to be having a great old time until he fell asleep in the car. When we arrived at the motel, he opened his car door and informed me he wasn't feeling very well. After fertilizing the bushes with his dinner, I managed to get him up two flights of stairs and into his bathroom. Being sick must have done him the world of good because he told me he was fine the next day. The same can't be said for the other two blokes.

THIS IS WHAT I CAME HOME TO 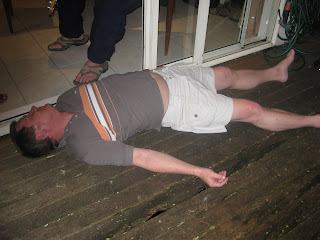 When hubby is away, I often have dinner at Mum and Dad's place. There's a bit of a standng joke between Steve and I because whenever I visit my parents on a Friday they say we may as well have fish and chips. Mum assures me they only eat fish and chips when I come over. Anyway, when I told Mum that Steve was visiting, she asked me to invite him for dinner and of course, Steve thought it would amusing to visit on a Friday. Yes, we had fish and chips.

Steve arrived and kinda took over the place (which is his way) much to the amusement of my mother. He came bearing flowers, wine, beers and made a yummy salad. We had a few laughs and he fitted in well. I think my Mum wanted to keep him. 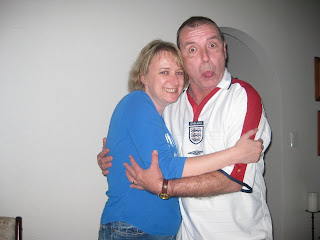 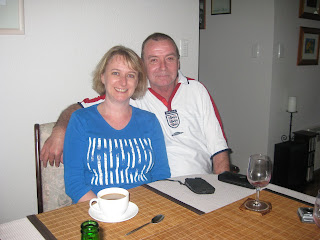 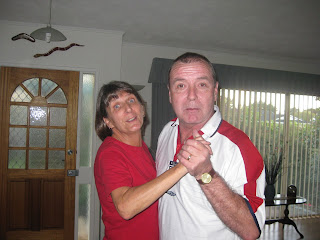 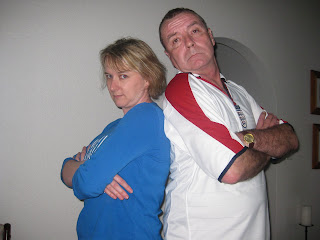 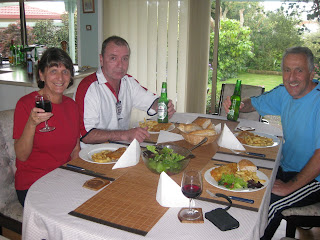 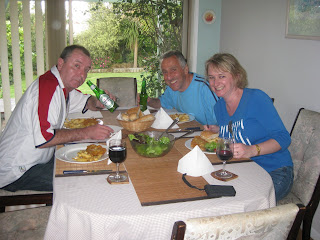 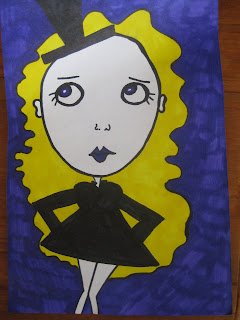 I've been a bit slack on the blogging front but I've had a good reason, honest!

One night last week, at around eleven in the evening while I was in the shower (don't get too excited...it's not a naughty story), my little dog began barking furiously. Hubby was away but I wasn't too concerned as she often barks at cats in this way. I continued showering, next minute there was a pounding at my bathroom door and a man's voice said, "It's OK Karen, it's only me." After I had recovered from my fright, I dressed and discovered it was my friend Laurie.

He had called earlier and left a message on the answering machine, asking if he could come and stay with us. Unfortunately, when I had played back the message, I had no idea what he was mumbling about and decided I would call him the next day. So, he came over at ELEVEN o'clock, knocked on the door and when nobody answered, BROKE into my house,hmmmmmmmmm. I don't know what I was more upset about, the fact that he let himself into my house or the fact that somebody else could have broken in so easily.

Anyway, we had a few drinks and I said it was OK for him to stay a while. Didn't have much choice really. The next day he fixed my door, cooked dinner and watched a couple of episodes of Dr Who with me so I guess I can forgive him. He finally toddled off to his own place later on in the week.

In other news, I've recently discovered one of my favourite bloggers is visiting my home town. Woohoo! Steve (Whitesnake) tells me he's coming over for a quiet time but hubby and I have other ideas. Me thinks a few beers and wines may have to be sunk. Be afraid Mr Snake, BE VERY AFRAID! I'm really looking forward to catching up with him and finding out if he's as mad as I think he is. I'll see if I can take some pics to share with you.

P.S. If there are any questions you would like me to ask him or if there's anything you want me to find out about him... let me know and I'll do my best *giggles*
Posted by KB at 17:50 18 comments:

I loooooooooooooooovvvvvvvvvvvvvvvvveeeeeeeeeeeeeeee Christmas but I must admit, seeing Christmas trees for sale in September is too much. Who needs to buy a tree in September? What are we going to do, put the tree up and leave it there for a few months? Actually, I decorated my tree and didn't take it down until the end of January one time. I found it quite amusing how horrified people were.

BTW, I have no idea how to spell Ba Hum Bug but that's why I have the spelling police around.
Posted by KB at 16:51 15 comments:

Email ThisBlogThis!Share to TwitterShare to FacebookShare to Pinterest
Labels: Christmas

According to my local radio station; Angie is attending therapy sessions for...wait for it...low self esteem issues. What is she thinking? She's gorgeous. If a woman who has been voted as one of the sexiest people on the planet has problems with self esteem, there's not much hope for the rest of us *giggles*.

Speaking of sexy, I wonder if Matt will be named sexiest man again? Handsome, intelligent, witty, talented, polite, softly spoken and humble. He certainly gets my vote. 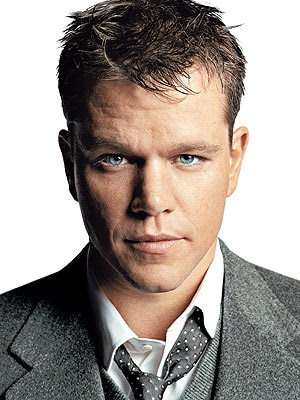 Why have people been giving me funny looks? Perhaps it's because I keep singing this song out loud at the most inappropriate times. *Bursts into song*

Flash Fiction - Every Friday, I compose a short story of 55 words - no more, no less. If you would like to join in the fun and games... post your story and report to the boss -
G-MAN
If you're not interested in contributing a story, feel free to read the other entries. I'm sure any comments you have would be appreciated.

Email ThisBlogThis!Share to TwitterShare to FacebookShare to Pinterest
Labels: Flash 55, kiss the girls