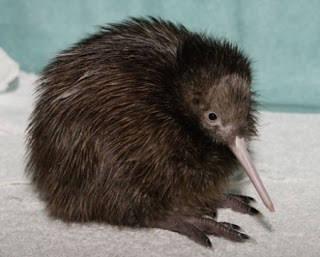 After comments such as...I thought New Zealanders were named after fruit and...is that what a Kiwi really looks like?...I've decided my readers need to know more about Kiwis.

A Kiwi is a native bird of New Zealand. They are semi-nocturnal which means few New Zealanders have seen them in the wild. They have wings but cannot fly (trust NZders to want to be named after a bird that can't fly). They grow to the size of a chicken, don't have a tail and have nostrils at the end of their bills to sniff out food. They eat worms, insects, grubs, berries and seeds. Yuk! Apparently, they can outrun a human. Wow!

The Kiwi was first used as an emblem in the late 19th century in regimental badges. The name 'Kiwi' for NZ soldiers came into general use during the Ist World War. New Zealanders carved a giant Kiwi on the chalk hill above Sling Camp in England.

Now we are referred to as 'Kiwis' in New Zealand and overseas. Here endeth the lesson. 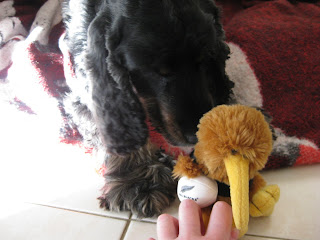 Here's a pic of Mr Kiwi and Coco. You wouldn't see a dog and a real Kiwi together. Dogs are considered as a predator to the Kiwi and are banned in many forests and parks to protect them.

Well now I'm edumacated!! I will no longer refer to you as a fruit hehehehe. You're now a no tailed chicken something or another...

You do make me giggle girl.

Thanks for the Kiwi info!

Ah a real one. Always when we go to the Zoo we do of course Spot the kiwi in the dark space where he walks around

Marja - yeah we are lucky to see them.

Don't know whether they are or not, but they look cuddly!
So, are the kiwi fruit named after the bird then?

This is better than Jemaine and Bret and Murray hahah

Sandy - I don't have a clue who those people are but I will take it as a compliment.

I love my Kiwi!

Toadee - Did Jay and I send you a Kiwi for your birthday? I can't remember now.

Are you being rude about the bush or is it just my dirty mind?

Yes, that is the very Kiwi, a most welcome and valued gift.
I confess, the dual meaning did cross my mind (then it re-crossed it, then it settled in the middle)

Toadee - Don't worry, I knew exactly what you meant. I remember now that we sent you the Kiwi. I bought mine on the same day.

How about taking some pics from your neck of the woods and I can post them on the blog.